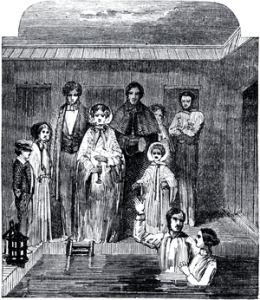 When Joseph was baptized, there was no church for him to be baptized into. He was baptized into the body of Christ – like protestants are. That was good enough for him, yet for everyone else, Joseph added other requirements. Requirements not mentioned in The Book of Mormon.

As with the subject of Authority, the same holds true here for Salvation. The Book of Mormon teaches that salvation comes through a direct encounter with God or Christ, and no one can do that for us. Like a simple answer to prayer. Like asking God for forgiveness, and Him giving an answer.

According to the Bible and The Book of Mormon, to show our willingness to follow God, He has asked three things:

He has said nothing regarding membership in a church.

Unfortunately, Joseph’s churches teach that salvation can only come in and through them. Once again, placing their church ahead of Christ:

31 Behold, verily, verily, I say unto you, I will declare unto you my doctrine.
32 And this is my doctrine, and it is the doctrine which the Father hath given unto me; and I bear record of the Father, and the Father beareth record of me, and the Holy Ghost beareth record of the Father and me; and I bear record that the Father commandeth all men, everywhere, to repent and believe in me.
33 And whoso believeth in me, and is baptized, the same shall be saved; and they are they who shall inherit the kingdom of God.
40 And whoso shall declare more or less than this, and establish it for my doctrine, the same cometh of evil, and is not built upon my rock; but he buildeth upon a sandy foundation, and the gates of hell stand open to receive such when the floods come and the winds beat upon them. (3 Nephi 11)

To go beyond these words is no small thing – in the eyes of God. It is a serious wound to the simplicity that is in Christ, as stated in the Bible and The Book of Mormon.

To go beyond these words shows an arrogance and a lack of humility akin to the Pharisees and Sadducees of old. It is an offense before God and the prophets who wrote them.