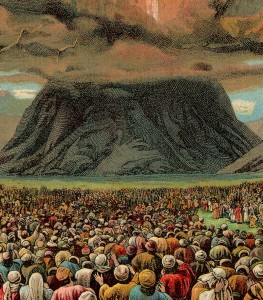 The final wound that has hurt God so badly is one that makes Him less than what He IS – the belief by Joseph’s followers that He is progressing and was once mortal. The Book of Mormon does not teach this or anything like it.

The Book teaches that Jesus is both Son of God and in many places God. It even says people prayed to Jesus, and Jesus let them. It leaves a lot of room for interpretation. What it does not give information on is the later ideological developments of Joseph, Rigdon, or others – and in particular a Hebrew teacher that showed Joseph some different meanings for “God” in the book of Genesis.

When Genesis says “man has become like us” and “let us go down and confound their tongues” the plural in Hebrew can lend itself to a world of possible interpretations. And with a verse like “whether there be lords many or gods many;” plus a personal revelation by a young elder (Lorenzo Snow – later LDS Church prophet.) who proclaimed:

Joseph was able to formulate a new view of the Godhead.

What people confuse at times is the similarity in glory of the Father and the Son – that Jesus is the Father, or that the Father is the Son. When Lorenzo thought he was seeing God the Father, he was actually seeing the Son. Thus, he should have said:

This coincides with the traditional view of Christ.

THE MYSTERY OF GOD

The Book of Mormon respects John the Revelator. Nephi saw the same events as John but was not permitted to write them, for he was told they were reserved for John to write. In the Revelation of John he says that the nature of God will remain a mystery until after the Lord comes:

7 But in the days of the voice of the seventh angel, when he shall begin to sound, the mystery of God should be finished, as he hath declared to his servants the prophets. (Revelation 10:7)

Therefore, no one’s salvation need be based upon an interpretation of God, His origins, or any of the unknowns. But it will be based upon our acceptance of His messenger and Son – Jesus Christ; and in knowing his true nature.

That he was born of a virgin – Mary; that he was raised among men and rejected; then crucified and buried; and on the third day rose again; that he showed himself unto men and ascended into heaven where he now sits at the right hand of God.

The Book of Mormon supports each one of these points, for their prophets saw them and wrote them.