LDS missionaries are proud to prove the truth of their church by pointing to the fact it is made up of a prophet and twelve apostles – just as Paul said:

20 And are built upon the foundation of the apostles and prophets , Jesus Christ himself being the chief corner stone; (Ephesians 2:20)

Unfortunately, the type of prophets and apostles Paul was referring to were not like those in Joseph’s church. How was Paul himself called? Did he get a call one day from Peter, James or John at church headquarters in Jerusalem? No he did not. Paul was called just how prophets were called – directly by God – as he was on the road to Damascus:

6 And it came to pass, that, as I made my journey, and was come nigh unto Damascus about noon, suddenly there shone from heaven a great light round about me.
7 And I fell unto the ground, and heard a voice saying unto me, Saul, Saul, why persecutest thou me?
8 And I answered, Who art thou, Lord? And he said unto me, I am Jesus of Nazareth, whom thou persecutest.
9 And they that were with me saw indeed the light, and were afraid; but they heard not the voice of him that spake to me. (Acts 22:6-9)

1 Paul , an apostle, (not of men, neither by man, but by Jesus Christ, and God the Father, who raised him from the dead;)
11 But I certify you, brethren, that the gospel which was preached of me is not after man.
12 For I neither received it of man, neither was I taught it, but by the revelation of Jesus Christ.
13 For ye have heard of my conversation in time past in the Jews’ religion, how that beyond measure I persecuted the church of God, and wasted it:
14 And profited in the Jews’ religion above many my equals in mine own nation, being more exceedingly zealous of the traditions of my fathers.
15 But when it pleased God, who separated me from my mother’s womb, and called me by his grace,
16 To reveal his Son in me, that I might preach him among the heathen; immediately I conferred not with flesh and blood:
17 Neither went I up to Jerusalem to them which were apostles before me; but I went into Arabia, and returned again unto Damascus.
18 Then after three years I went up to Jerusalem to see Peter, and abode with him fifteen days.
19 But other of the apostles saw I none, save James the Lord’s brother. (Galatians 1)

So the foundation of God’s church according to Paul is of prophets like Amos; and apostles like himself. Neither of which currently exist in any of Joseph’s churches, nor ever have they. The call of Apostle was to testify of the resurrection of Christ:

21 Wherefore of these men which have companied with us all the time that the Lord Jesus went in and out among us,
22 Beginning from the baptism of John, unto that same day that he was taken up from us, must one be ordained to be a witness with us of his resurrection.
23 And they appointed two, Joseph called Barsabas, who was surnamed Justus, and Matthias. (Acts 1:21-23)

The church of The Book of Mormon did not even have apostles, they had “disciples.” The church office those disciples held was that of “Elder:”

The manner which the disciples, who were called the elders of the church, ordained priests and teachers—(Moroni 3:1)

No matter how they interpret it, the followers of Joseph cannot substantiate why their church structure includes apostles. Nor can they explain the call of Paul. They deny both the Bible and The Book of Mormon.

This misinterpretation of the call of an apostle as being a church office is a contradiction to the order of God. 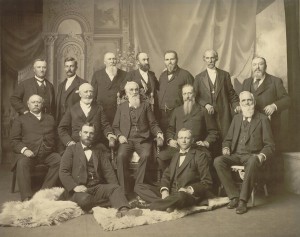