Joseph gave a revelation (D&C 132) that not only allowed for plural relationships but even required it – if you wanted to get to Christ (v.23). Such a marriage could only be performed in one of the Mormon temples, therefore, only active temple attending Mormons could get to Jesus.

61 And again, as pertaining to the law of the priesthood—if any man espouse a virgin, and desire to espouse another, and the first give her consent, and if he espouse the second, and they are virgins, and have vowed to no other man, then is he justified; he cannot commit adultery for they are given unto him; for he cannot commit adultery with that that belongeth unto him and to no one else.
62 And if he have ten virgins given unto him by this law, he cannot commit adultery, for they belong to him, and they are given unto him; therefore is he justified.
63 But if one or either of the ten virgins, after she is espoused, shall be with another man, she has committed adultery, and shall be destroyed; for they are given unto him to multiply and replenish the earth, according to my commandment, and to fulfil the promise which was given by my Father before the foundation of the world, and for their exaltation in the eternal worlds, that they may bear the souls of men; for herein is the work of my Father continued, that he may be glorified.
64 And again, verily, verily, I say unto you, if any man have a wife, who holds the keys of
this power, and he teaches unto her the law of my priesthood, as pertaining to these things, then shall she believe and administer unto him, or she shall be destroyed, saith the Lord your God; for I will destroy her; for I will magnify my name upon all those who
receive and abide in my law. (D&C 132) 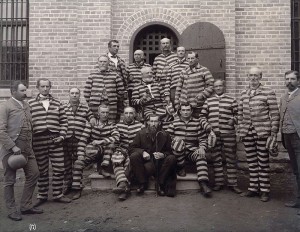 Thus, many of the early church leaders were willing to go to prison over polygamy instead of giving it up. Currently, though polygamy is not allowed, still, if a man divorces civilly a women he was sealed to, he can marry another in the temple and have her sealed to him also. But a woman cannot do likewise.

Once sealed to a man, she is forever sealed to him regardless of a civil divorce – unless she can obtain a “sealing cancellation.” Thus, divorced or widowed Mormon women find it hard to remarry because no one wants to marry a woman they cannot be sealed to.

This doctrine has been a blight to LDS women and children since its inception, and is a serious wound to the love of God, and is not a requirement of salvation. The Book of Mormon even condemned it:

24 Behold, David and Solomon truly had many wives and concubines, which thing was abominable before me, saith the Lord.
25 Wherefore, thus saith the Lord, I have led this people forth out of the land of Jerusalem, by the power of mine arm, that I might raise up unto me a righteous branch from the fruit of the loins of Joseph.
26 Wherefore, I the Lord God will not suffer that this people shall do like unto them of old.
27 Wherefore, my brethren, hear me, and hearken to the word of the Lord: For there shall not any man among you have save it be one wife; and concubines he shall have none;
28 For I, the Lord God, delight in the chastity of women. And whoredoms are an abomination before me; thus saith the Lord of Hosts.
34 And now behold, my brethren, ye know that these commandments were given to our father, Lehi; wherefore, ye have known them before; and ye have come unto great condemnation; for ye have done these things which ye ought not to have done. (Jacob 2)

We should recall what the Lord said regarding the true order of marriage:

5 And said, For this cause shall a man leave father and mother, and shall cleave to his wife: and they twain shall be one flesh?
6 Wherefore they are no more twain, but one flesh. What therefore God hath joined together, let not man put asunder. (Matthew 19)

Now if we understand that God is love, the verse has more meaning:

16 And we have known and believed the love that God hath to us. God is love; and he that dwelleth in love dwelleth in God, and God in him.
17 Herein is our love made perfect, that we may have boldness in the day of judgment: because as he is, so are we in this world.
18 There is no fear in love; but perfect love casteth out fear: because fear hath torment. He that feareth is not made perfect in love.
19 We love him, because he first loved us. (1 John 4)

To believe God does not love us unless we have certain ordinances is preposterous and contrary to everything Jesus, the Bible and Book of Mormon teach.

To believe that God will not respect marriages based on love can leave a people feeling hopeless and fearful.

According to the word of God:

What therefore LOVE has joined together, let not man put asunder.

***Because Joseph went beyond the mark of his original call; and because he changed revelations; it is not safe for anyone to base their view of God, or what He requires on one verse – D&C 132.

God did say He would establish all doctrine in the mouth of two or three witnesses. Mormons are unable to produce a second or third witness for this doctrine.

Joseph’s own wife Emma proclaimed that D&C 132 was the call of his downfall, and indeed, he was killed shortly after revealing it.

In his own words, Joseph said the Spirit of the Lord had left him and he was going as a lamb to the slaughter.

And as always, God used the wicked to perform His retribution, and Joseph was killed; his divine protection having been removed.